Interest on 2nd Single Cell Protein (SCP) in feed formulation is growing thanks to their stability of price, availability, sustainability, non-competitiveness with human food and high protein level are some characteristics of this product. More of this, AminoPro price stability, especially in this moment where the price of fishmeal strongly increases, is a plus not to forget!

Protein contents and its digestibility are crucial to support high growth rate of young animals, to improve feed efficiency, to reduce nitrogen losses and excretion in the environment and to limit biogenic amine synthesis that can impair animal health.

Recently Mazzoleni SPA launched an updated version of its SCP, namely AminoPro™75, that now guarantees 75% of crude protein, 5% more of the previous version. AminoPro™75 is a blend of different batches of the raw material standardized by Mazzoleni SpA for its crude protein and aminoacid content.

AminoPro™ 75 was recently tested for Protein Digestibility following Boisen and Fernandez (1995) method, an in vitro test used to predict apparent protein digestibility. Briefly, feed samples are first dissolved in phosphate buffer to mimic saliva imbibition and then incubated for 6 hours with hydrochloric acid solution + pepsin (to replicate stomach environment) and 18 hours with pH 6.8 buffer + pancreatin to replicate what happen in the gut. At the end of in vitro digestion, undigested fraction is collected and nitrogen content determined. The difference between total initial nitrogen and undigested nitrogen is used to calculate nitrogen, and thus crude protein, digestibility. Results of the test showed a high protein digestibility are comparable to those of the main protein concentrates (Fig. 1).

Acid Binding Capacity (ABC) is another key feature of protein concentrates.  ABC measures the amount of acid in milliequivalents (meq) required to lower the pH of 1kg food to pH 4.0 (ABC-4) or pH 3.0 (ABC-3). Neutralization of gastric acids limits feed digestibility in young animals and the acid-barrier effect of the stomach against pathogens. Compared to the two main protein concentrates used, AminoPro™ 75 shows less than half of the ABC-3 compared to soy protein concentrate and fish meal (Tab. 1).

Taken together the above data confirm the suitability of AminoPro™75 as replacer of the main protein concentrates used in the diets in aquaculture, poultry and livestock.

Compared to fishmeal, indeed, AminoPro™ 75 is characterized by a higher crude protein, a lower ash, higher stability in terms of shelf-life, availability and price. Sustainability is another key advantage of AminoPro™75 compared to fishmeal. The expected growth of aquaculture in the next years cannot rely of fishmeal as main protein source due to the continuous reduction of fish stocks, considering that the expected increasing in fishmeal from trimming cannot fulfil the demand of growing aquaculture. Therefore, fishing for feed fish cannot be sustainable anymore. 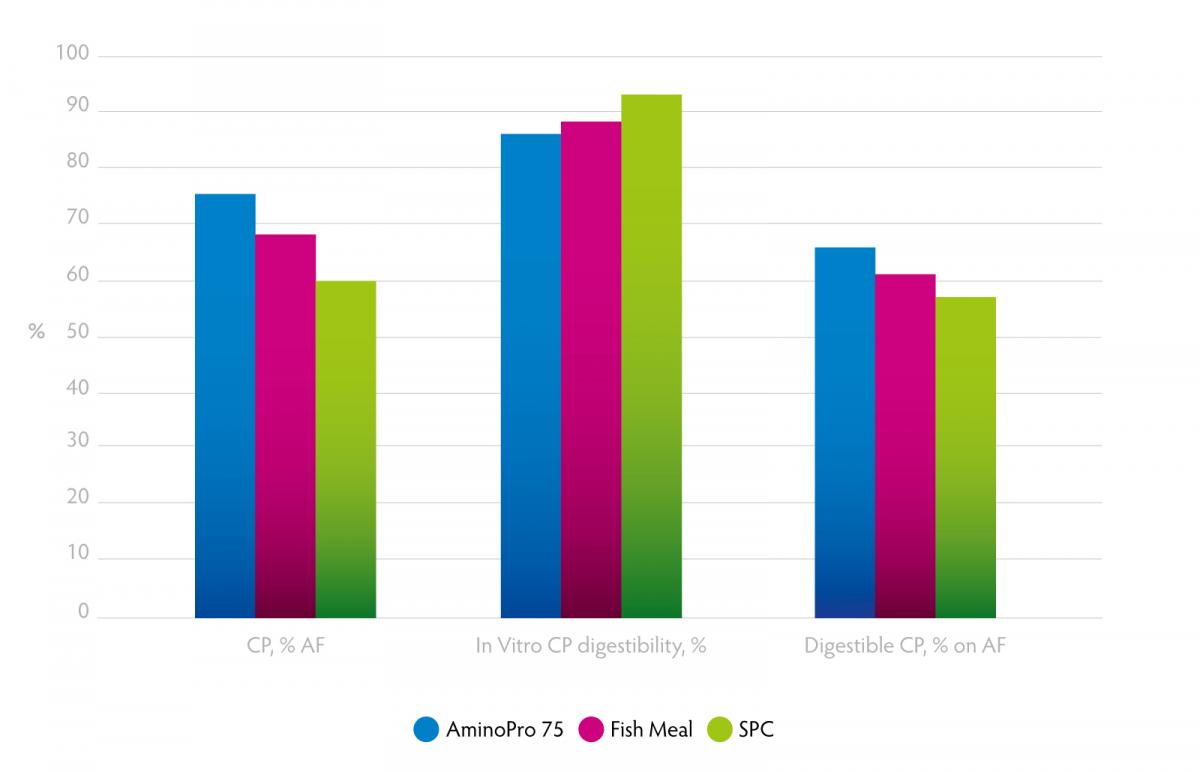