Beneficial effects of using live and inactivated yeast in animal nutrition have been widely demonstrated for all animal species, from ruminants to monogastrics. In the last decades scientific and industry communities focused their attention on yeast fractions, namely intracellular fluid, among the others rich in B vitamins, growth factors and nucleic acids (further processed to produce free nucleotides), and cell wall (fig. 1). 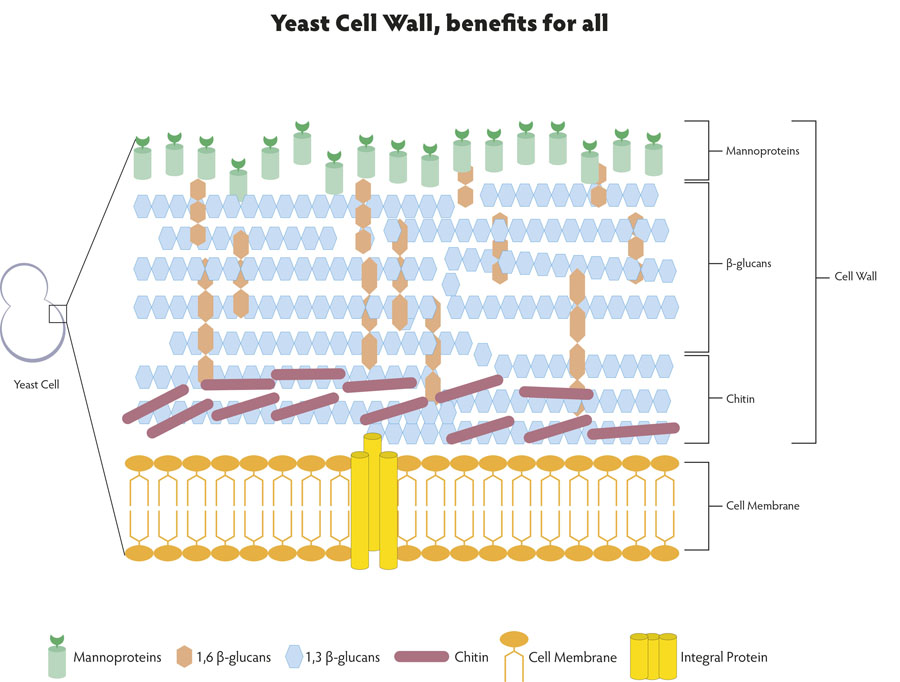 Those fractions have been defined “paraprobiotics”, that are non-viable microbial cells (intact or broken) or crude cell extracts (i.e., with complex chemical composition), which, when administered (orally or topically) in adequate amounts, confer a benefit on the human or animal consumer (Taverniti and Guglielminetti, 2011).

Cell wall from yeast is rich in mannan oligosaccharides (MOS) and (1,3)-(1,6)-β-D-glucan, functional polysaccharides, that exert several beneficial effects on gut health both acting directly on gut tissue and against pathogens and toxins. MOS are located in the outer layer of the cell wall and their capability to bind bacteria cell, limiting their growth and the capacity to adhere to the gut mucosae, has been widely demonstrated. MOS interact with bacterial fimbriae, responsible for adhesion to gut mucosae, thus saturating their adhesion sites. YCW are also capable to bind several mycotoxins, making them harmless. Studies demonstrated that the strong binding capacity of YCW is very high for Aflatoxins, Fumonisin, and Zearalenone and moderately high for T-2 Toxin.

All the above characteristics translate into beneficial effects on animal health. Several meta-analyses demonstrated that YCW improved feed conversion and lowered mortality in broilers and turkeys (Rosen, 2007). At the same way, metanalysis of studies on piglets showed beneficial effects on body weight gain, feed intake and feed efficiency, together with and improvement in immune response against PRRS, and resistance against bacterial toxins, salmonella and E. coli (Kogan and Kocher, 2007). In dairy cows YCW were able to improve immune function, increasing colostrum quality (Broadway et al., 2015), while in beef reduced the severity of disease at receiving (Rivera et al., 2019). Benefits in terms of immune response and disease resistance were also reported in fishes fed glucans from yeast (Ringo, 2012; Vetvicka et al., 2013; Novarrete and Trovar-Ramirez, 201).
Taken together, the above evidences highlight the wide-spectrum beneficial effects of feeding yeast cell wall to food producing animals.